The el-‘Umdah journal, Published twice a year by the Qur’anic and Tafsir Studies Program Faculty of Ushuluddin and Religious Studies UIN Mataram. We accept all kinds of scientific texts related to our focus and scope that have never been published. Articles were the result of research, non-research / conceptual or literature review relating to the study of the Qur'an and tafsir related to the contemporary issues, which lead to implementing the messages of the Qur'an into human social life. We gladly invite scholars and students to contribute on our journal. Each articles that has been submitted was not a reflection of the editorial board's view.

The el-‘Umdah journal, published by the Qur'an study program and the UIN Mataram Interpretation, publishes writings twice a year. Editors accept scientific texts that have never been published by other media. Manuscripts that are sent are the result of research, non-research / conceptual or literature review both inside and outside the country relating to the study of the Qur'an and its sciences as well as Islamic and social issues, which aim to actualize the messages of the Qur'an into the reality of human life individually and socially. The editor has the right to edit the language without changing the contents of the writing. Each text is not a reflection of the editorial board's view. Submitting articles or scientific texts to the address. 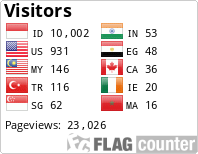